There are no pilots online!

Remember: Weekly and weekend flights are merely suggestions. You may fly any flight you desire

A Night To Remember 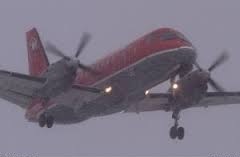 In an earlier life, I flew for an airline in Minnesota, flying a Saab 340 around the region. As a Captain, I was on top of the world! Not only was I quite experienced in the airplane (and driving a brand-new pick-up truck), but I also wrote study guide material for the pilot group. Which was quite surprising considered what happened late one night in the winter of 1990.

I was a fairly new Captain. We were fully loaded, headed to the town of International Falls for the night, right on the Canadian border. It was a cold night in northern Minnesota, a blizzard in full swing. My copilot Chris and I, with our flight attendant and 33 passengers flew up north quickly, enjoying the clear night sky at 16,000'. The weather in Int'l Falls was not cooperating however. The wind was from the southeast at a steady ten knots, but the only way in was by using the ILS to runway 31 thanks to the ongoing blizzard. No problem, the Saab 340 has a ten knot tailwind limitation on landing, so we were good there. At the airport, the owner and plow operator, Thor, called us on the radio and said he had just plowed the runway. This of course removes the loose snow, leaving the now-polished hard stuff still on the runway.

Down we came to the runway. At this weight, our calculated landing speed was 116 kts. Plus ten knots correction for being in icing conditions. That's 126 kts. With the wind, our ground speed would be 136 kts, or  156 mph. On a tricycle. On a polished, slippery runway. At minimums we get the runway in sight, reduce slightly to our corrected landing speed. It's immediately obvious- we are moving! I plant the airplane on the runway right where the glideslope meets the pavement (you can't make a hard landing on snow). Immediately I lower the nose, move into maximum reverse thrust and jump on the brakes, saying to the co-pilot, "Get on the brakes, get on the brakes..." The runway is 7001' long. As we go by the halfway point, I remember saying as calmly as could be, "Boy, you can really feel that antiskid working!"

Meanwhile Thor is sitting in his truck waiting for us, trying to keep warm. Suddenly there is a tremendous roar of two big turboprops in maximum reverse. He looks up and sees a big ball of snow with a red beacon in the middle go flying by on the runway. He's convinced we're not going to get stopped. As we slow below 100 knots, several things start to happen. The big Dowty-Rotol propellers begin throwing even more snow in front of us, blinding our visibility. The reverse thrust at slower speeds will pull air from around the rudder, causing it to slam from one side to the other, so Chris reaches down and engages the rudder lock while I steer with the noswheel (or try to). I keep the two throttles all the way back in max reverse, still pressing hard on the brakes. Finally we lurch to a stop. I move out of reverse, the tremndous cloud of blowing snow in front subsides. There, not 75 feet in front of us, is the end lights on the runway, shining bright red. I slowly taxi back, park at the gate and we unload. Afterward, the flight attendant comes up and says, "Now Dave, I know you're a new Captain, but you can't leave it in reverse that long. Makes the passengers nervous." I simply said, "Ok, Sara, I'll try to remember that." She wouldn't understand.

Later the next day, back at home, I dig through the Operating Manuals to try and find out why it took so long to stop. There it was, in the back, in the Icing Conditions chapter, a little footnote. "Note: When braking action is poor, tailwind restriction is one knot." I got out the big spaghetti charts and calculated our predicted landing distance using last night's conditions. According to the charts, we should have stopped 300' beyond the runway end. New Captain indeed. 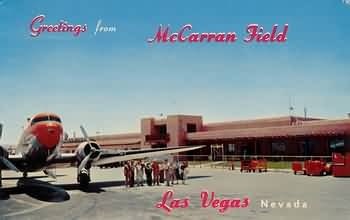 Beginning in 1920, Western Airlines was flying into Las Vegas through Anderson Field with a regular daily schedule. In 1926 however, the owners sold the airport. The new owners closed the airport and kicked Western out. So Western went looking for an airport. A local businessman named P.A. Simon built them an airport. This was excellent for Western Airlines, at least for a few years. In the late 1930's, the local government wanted to buy the airport and modernize it. Western refused to sell though, but when WW2 began, they relented. Senator McCarran was able to secure federal funding for purchasing the airport and modernizing the terminal. Thus the airport was name McCarran Field.

But wait! A man named Crockett opened an airport south of Las Vegas in 1942, calling it Alamo Field. in 1945 the Army wanted to change McCarran Field into a gunnery school, so Clark County bought Alamo Field in 1948 and changed its name to McCarran Field. The original McCarran Field became Nellis AFB.

As the airport grew, so did the terminals. In 1968 it was renamed McCarran International Airport. Northwest and Japan Airlines began non-stop 747 service to Tokyo. Virgin Atlantic began non-stop service to London in 2000. The county decided that McCarran would reach it's capacity of 55 million passengers per year in 2008. Plans were made to build a new, second Las Vegas Airport, to be called Ivanpah Valley Airport. However, the advent of the 2007 recession caused the new airport idea to be suspended indefinitely. During the Covid pandemic in 2000, several tower personnel tested positive, so McCarran's tower was closed for several days. Airlines used a common traffic advisory frequency to keep flights moving. 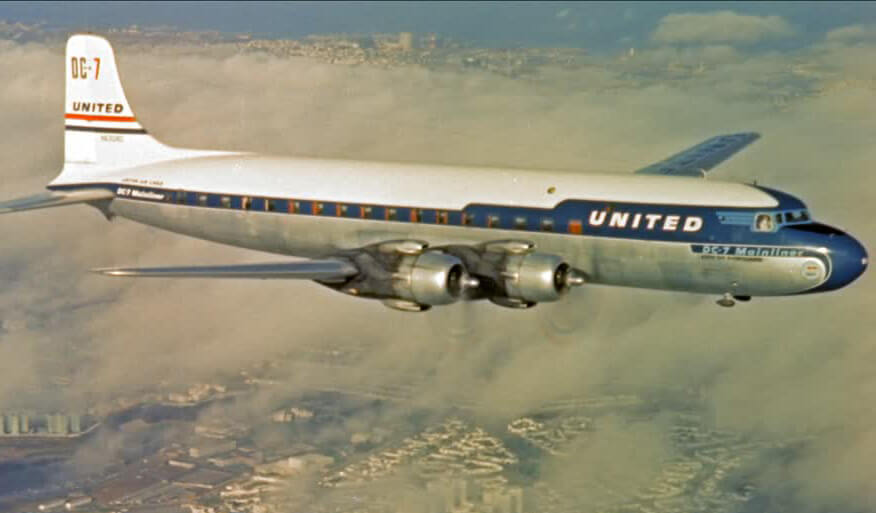 Back in the early 1950's,transcontinental non-stop airline service was only a dream for two reasons: Equipment, and the Civil Aeronautics Board. The best aircraft available were the L749 and the DC6. They both had the range, but just barely. With so much fuel, they could carry barely enough passengers to make the trip financially worthwhile. But all that was mute: the CAB at the time limited airline crews to eight hours of flight time, period. And that just wasn't enough.

The airlines went to Douglas and Lockheed. They wanted an airplane that could not only go the distance, but do it with enough passengers to make a profit. Plus, it had to fly it in less than eight hours. This was really pushing the outside of the envelope in 1953. Lockheed stretched the L749 and created the L1049. Airlines with Douglas equipment were presented with the Douglas DC-7.

The original DC-7 could make the grade- almost. On paper, it could just barely make the speed and distance requirement, but in reality it often fell short. The airlines said try harder. Douglas increased the gross weight and added a few more gas tanks, calling it the DC-7B. The new DC-7B also cost 20% more than the base DC-7. Still, there were issues. The DC-7's had the big Wright R3350's, the 'ultimate' piston engine. As designed, at normal cruise power settings they were powerful, capable and reliable engines. However, in order to make the run from New York to the west coast in less than eight hours against prevailing winds, crews had to run the engines at maximum power, all of the time. This resulted in a much higher fuel burn rate, greatly reduced engine reliability and considerably higher maintenance costs. The Lockheed 1049 had the same engines, and also had the same issues. Even with everything running perfectly, enroute advertised flight times were still within minutes of the eight-hour limitation (United's 1955 scheduled showed NY-LA in 7+50). If the winds aloft created a planned flight time of over eight hours, flights would legally have to land in Chicago, St Louis or Dallas and get a new crew. For all these reasons, airlines were forced to limit the number of nonstop transcontinental flights. United offered only two daily flights- one to LA, one to San Francisco. Today, there are over a dozen daily non-stops to LAX/SFO from New York, with flight times under six hours.

Still, the DC-7 was very nice. The seats were large, soft, comfy. Plenty of sound-proofing and vibration dampeners helped quiet and smooth things out. It was the quickest thing in the sky that a civilian could fly in. The meal service was outstanding and the bar was well stocked. It wasn't unheard of to raise the cabin altitude just enough to put everyone to sleep after the meal. Sleeping was a favorite passenger pastime!